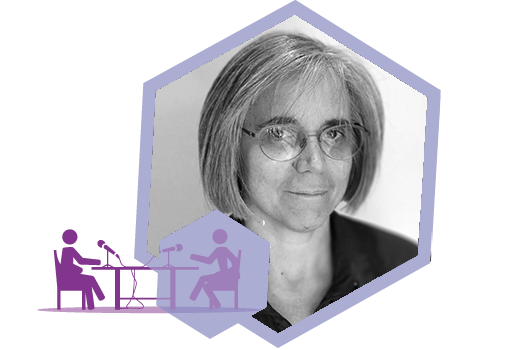 We interviewed Sonia Marín, research team on Applied Mycology of the UdL about the fascinating world of mycotoxins, especially focusing on Aspergillus flavus.

We interviewed Sonia Marín, Agricultural Technical Engineer from the Polytechnic University of Catalonia (UPC), Agricultural Engineer from the University of Lleida (UdL) and Doctor in Agricultural Engineering specialized in the area of molds and mycotoxins, member of the research team on Applied Mycology of the UdL and the consolidated research group in Generalitat de Catalunya’s “Plant Products Technology Unit”, about the fascinating world of mycotoxins, especially focusing on Aspergillus flavus.

YOU HAVE SPECIALIZED IN THE STUDY OF MOLDS AND MYCOTOXINS. ¿WHAT LEADS YOU TO WORK IN THE FASCINATING WORLD OF APPLIED MYCOLOGY?

Undoubtedly, the variety of roles that fungi can play. The Fungi kingdom is broad enough to allow different approaches and applications.

They are our allies, playing a crucial role in the maintenance of the biosphere as they are the main decomposers of organic matter. They also produce metabolites with medical and biotechnological applications and are responsible for the production of fermented food.

WHAT DOES APPLIED MYCOLOGY CONSIST OF AND HOW DO THE RESULTS OF YOUR RESEARCH REACH THE ANIMAL PRODUCTION SECTOR?

Concerning Applied Mycology, during the last 40 years, our research team has worked relentlessly on generating knowledge about mycotoxins and related problems

Mycotoxins are fungal metabolites that are toxic for humans and animals, and they are usually present in vegetal raw materials, especially cereals. These raw materials are used in the formulation of feed and the ingestion of mycotoxins triggers different forms of mycotoxicosis in different farm animals.

If the ingestion is not excessively high, the effect may go unnoticed, debilitating, for example, the immune response against other diseases.

Our research has focused on preventing the accumulation of mycotoxins in vegetal raw materials during the post-harvest stage, thus reducing the exposure to the animals.

We have also been working on the development and application of adsorbents in feed to reduce the exposure of the animals to mycotoxins when they consume the contaminated feed.

The adsorbents, when added to the feed and ingested by the animals, form irreversibly non-digestible complexes with the mycotoxins in the gastrointestinal tract. This reduces their absorption, which means they will be excreted through the feces. 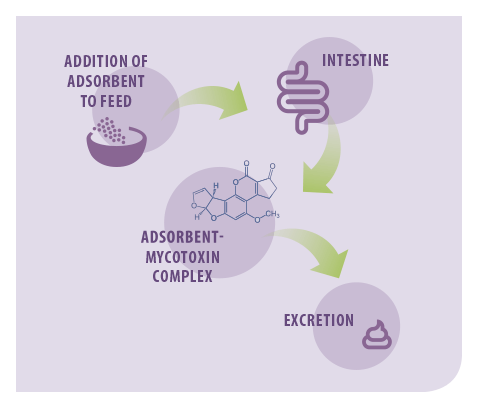 At the University of Lleida, we have the scientific-technical attention and collaboration service for companies. Particularly, from the Microbiological Quality service for the agrifood sector we advise and work on joint projects with all kinds of companies: feed manufacturers, additive-producing companies, and veterinarians working in the field.

AMONG THE MOLDS THAT YOUR RESEARCH TEAM HAS WORKED ON, ASPERGILLUS FLAVUS IS WORTH NOTING. WHAT IS THE IMPORTANCE OR THE IMPACT OF THIS MOLD ON ANIMAL PRODUCTION?

The growth of Aspergillus flavus, like any other mold, on feed or raw materials for feed manufacturing, entails a decrease in said raw material’s weight, as well as a loss in nutritional value.

In the case of A. flavus, if the strain is mycotoxigenic, it will lead to the accumulation of aflatoxins as a result of their growth.

WHAT ARE THE CHARACTERISTICS OF THE RAW MATERIALS OR THE FEED THAT SHOULD MAKE US SUSPECT OF CONTAMINATION WITH ASPERGILLUS FLAVUS?

It is difficult to establish specific characteristics for A. flavus, but keeping in mind that the conditions that lead to their growth are similar to the ones that facilitate the growth of other molds, as a general rule it is recommended to reject any batch with a high percentage of broken grains, superficial dust, low weight grains or visible mold.

In particular, it is possible to observe green areas (conidiophores) with a granular appearance in heavily contaminated corn batches. 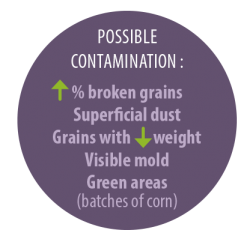 ARE THERE ADDITIVES OR OTHER METHODS THAT HAVE PROVEN TO BE USEFUL FOR REDUCING THE LEVEL OF CONTAMINATION OF RAW MATERIALS WITH ASPERGILLUS FLAVUS?

Reducing the contamination of the raw material with A. flavus in the stages immediately before their use in the feed is pointless because the problem is the aflatoxins, not the mold itself.

Therefore, the focus should be on minimizing the presence of A. flavus from the beginning, using a preventive approach to avoid the production of aflatoxins.

The contamination of raw materials with A. flavus usually occurs in the field, through spores that are present in the soil, weeds, harvest residues… Managing all of them is very important to minimize the level of inoculum in the field.

⇰Once the fungal spores are on the plant, they can germinate, grow and multiply depending on factors such as climatology and the presence of pests.

Therefore, at this stage, the application of insecticides and fungicides, or any other method of control, will be essential.

⇰After harvest, it is important to avoid that the transportation and storage elements, due to inadequate hygienic conditions, contribute with more inoculum. In this sense, the humidity must be sufficiently low to prevent additional growth.

However, sometimes storage structures are not adequate to prevent fluctuations in humidity, leading to condensations, pests, etc. In this case, it is possible to use preservative additives, such as sorbic, propionic or acetic acid, and their salts.

YOUR RESEARCH TEAM HAS WORKED ON THE DEVELOPMENT OF MODELS FOR PREDICTING THE GROWTH OF ASPERGILLUS FLAVUS AND THE PRODUCTION OF AFLATOXIN B1. WHAT DO THESE PREDICTION MODELS CONSIST OF AND WHAT PARAMETERS ARE THEY BASED ON?

During the last years, we have focused on the problem of the accumulation of mycotoxins in the post-harvest stage (during storage and transportation of the susceptible raw materials) using mathematical models in which the basic parameters that determine this accumulation are temperature and moisture content (water activity).

⇰These models allow the prediction of the behavior of molds under different conditions.

We have focused on the prediction of the accumulation of aflatoxin B1, as it can be produced both in the pre-harvest and post-harvest stages and due to its toxicological importance. 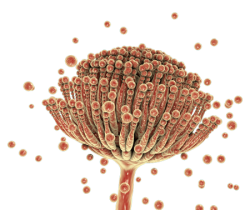 WHAT IS THE UTILITY OF THE PREDICTION MODELS?

We have developed kinetic and probabilistic models.

1. The first ones would allow us to respond to questions such as What concentration of aflatoxin B1 will I have in the silo/storage facility in specific conditions of temperature and humidity after “X” days of storage?

It would be a panacea, but we have demonstrated that the concentration of aflatoxin B1, is highly dependant on the strain that produces it, which means that the practical viability of these kinds of models is compromised.

2. Consequently, we have focused on probabilistic models that allow us to respond to questions such as:

HOW IS THE INFORMATION OBTAINED APPLIED?

Through the scientific-technical service, we advise the feed manufacturing companies about the implementation of safety management systems, including the minimization of the accumulation of post-harvest mycotoxins.

⇰ Additionally, we have collaborated in the development of recommendation guidelines for controlling aflatoxins in animal production, applying preventive measures (among them, the use of predictive models) from the field or imported products to the farm.

Water activity (aw) is the amount of free water in the feed or raw material. In other words, it is the water that is available for the growth of the microorganisms so they can carry out different chemical reactions.

The aw value depends on the composition, temperature and water content of the product.

Molds, compared to bacteria and yeasts, are more resistant to low aw values, which means they are predominant in low aw substrates.

Among molds, we can find moderately and highly xerophilic species. Among the latter are Aspergillus and Penicillium, which are capable of growing below 0.80 aw, and frequently compromise the stability of feed and raw materials. 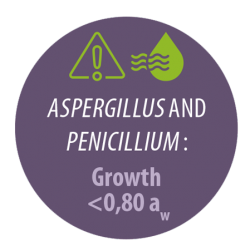 IS THERE ANY INTERRELATION BETWEEN THE RANGE OF WATER ACTIVITY AND pH OR ARE THEY INDEPENDENT PARAMETERS?

Indeed, there is an association between the inhibiting effect of a low pH and low water activity.

Water activity is a more influential factor than pH when it comes to fungal development. However, the antimicrobial capacity of an increased acidity can be boosted by simultaneously reducing the water activity.

In the same way, there is a clear relation between the inhibiting effect of low temperatures and water activity.

BASED ON THE RESULTS OF YOUR STUDIES, WHICH WOULD BE THE IDEAL STORAGE CONDITIONS FOR CORN SILAGE TO PREVENT THE GROWTH OF ASPERGILLUS AND THE PRODUCTION OF MYCOTOXINS?

In our studies with samples of corn silage produced in Spain, the incidence of aflatoxins (produced by Aspergillus) was low (10% of the samples were positive).

⇰ However, Fusarium mycotoxins were detected in 40% of the samples and fumonisins were the most frequently detected. 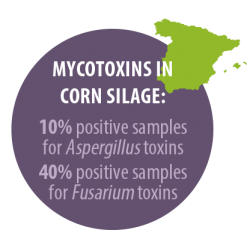 The level of mycotoxins detected in the positive samples, fortunately, did not exceed the EU reference values for animal feed.

Therefore, improving the quality of the crop destined to producing silage, correctly compacting the silage to eliminate oxigen and effective acidification (including, if necessary, lactic cultures) may be the best options to prevent contamination.

The most common situation observed in silage is the co-occurrence of multiple mycotoxins, which is especially worrying due to their potential additive or synergic effects on animals.

EVIDENTLY, WHEN IT COMES TO THE PRESENCE OF MOLDS IN RAW MATERIALS, ZERO RISK DOES NOT EXIST. HOWEVER, WHAT MEASURES CAN WE ADOPT TO MINIMIZE THE RISK OF THESE MICROORGANISMS PRODUCING MYCOTOXINS?

As you pointed out, it is common for molds to be in the environment and, thus, in the raw materials destined to animal feed.

However, there are three strategies we should follow to reduce their impact, only one of which consists of reducing their production: